PHDefence is starting off as it means to go on this year – new students who we’re very pleased to see and who are already shaping up to be fantastic martial artists, guest instruction from Andrew Holland of MASAC Ju Jitsu in its second training session of the year and a lot of great ideas in store for the rest of the year. I’ve got a few things to say in this one so apologies for the essay. I made a meme though, so…

Andy’s approach was largely the same as ours, but introduced plenty of fresh ideas which PHDefence is always open to – I certainly have taken on board some great ideas and will be implementing them along with some awesome ones I’ve had brewing in my mind while I should have been writing essays over Christmas!

Before I go any further with feedback and general waffle, I just want to thank Andy once again for coming, and for sharing his top-notch instruction with us. While you can tell a good deal from seeing someone on YouTube, keeping in touch online, etc you can never properly know another instructor until you see them teach, or even better train with them yourself. I’ve now had the pleasure of doing both, and so I can say truthfully that Andy’s approach is commendable, enjoyable and effective. If I was a scummy crim, I wouldn’t like to be caught by this guy standing over my victim, crowbar-in-hand, put it that way! He’s big in the BCA, so you know he’s epic anyway, regardless of anything I have to say. Andy has written about the night on his blog, which I recommend everyone take a look at: http://theselfdefenceexpert.wordpress.com/2012/01/16/the-tour-begins-2012/?utm_source=The+Newsletter+List&utm_campaign=1000696770-RSS_EMAIL_CAMPAIGN&utm_medium=email

As I said, I’ve got a lot of ideas for PHDefence including (but certainly not limited to) some new warmups, some new and vastly improved methods of stretching following some training revelations I’ve had at home, some small refinements I’ve made a while back to my CSPS syllabus regarding defending strikes which I think PHDefence will benefit from, a few things I didn’t think you all were ready for yet (my deepest and most sincere apologies for underestimating you in this way – it is never a good thing for an instructor to underestimate what his students are ready for, and I am truly sorry for this) and a few more things that I think you’ll approve of which are far too epic to utter a word about publicly.

A Note on the New System:

PHDefence, as some of you will already know, is undergoing a change in how things are done. Instruction will be split evenly between myself and Sifu Paul. Before, it was split in such a way that we would do an hour each every week, usually Paul then me. Now because of Paul’s work commitments we will be operating on an interlocking week pattern where one week I will be teaching the whole session, and the next Paul will do (though I’ll be there as Pad Man as often as I can manage to be), then the next week I’ll do again, etc. This week was Paul’s (though Andy’s really this time) and next week will be mine, to start you off knowing where things are going to be. It makes sense, trust me. I’m just tired and not articulating this particularly eloquently tonight. 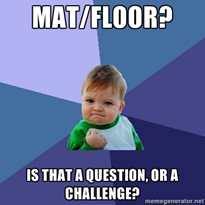 One new student in particular was commended by Andy for being ‘hardcore’, as it has been brought to my attention that on his second session this dude (who’s at the end of primary school as well) had the choice of doing the groundfighting on the mat or on the wooden floor, and he chose the floor! It’s exactly this kind of warrior spirit that PHDefence needs, so (you know who you are) – we’re proud of you my friend. Good on you dudeth.

Just for that, I made a Success Kid meme.

I might make this a recurring theme for special congrats…

Until next week folks! It’s going to be a good one – make sure you make it down!

What do you think? Join the discussion below: Cancel reply

This site uses Akismet to reduce spam. Learn how your comment data is processed.